Home / About the Artist

John O’Connor was born in London into a family distinguished for three generations in the world of theatre and music.

He studied at Chelsea School of Art where he was awarded two drawing prizes and graduated with a first class honours degree in Fine Art.

This was followed by two years of postgraduate study at the Slade School where his tutors were Robyn Denny and Bernard Cohen.

While still at Chelsea, he collaborated with the psychiatrist R. D. Laing in organising a collective exhibition of his own and fellow students’ work at Kingsley Hall, London.

During his student years he was working towards a personalised style of abstract expressionism, but as he explains in the introduction in the catalogue for a retrospective exhibition that was held in the British Council in Lisbon in 1994, he became desillusioned with the direction that modern art was taking. and destroyed many of his early works. In his own words:

“This was a holocaust from which, I hoped, the smoke would get up the nostrils of what Windham Lewis called ‘the Demon of Progress in the Arts’ – an apostatic act which would free me from the clutches of what the Germans called ‘Der Zeitgeist’, the spirit of the times.”

At this time he returned to the study of nature and the works of the old Masters.

He emerged in 1974 with an exhibition at the Marlborough Gallery, London, of a suite of etchings called In Nomine Domini accompanying texts by Michael Schützer-Weissmann on the lives of early English composers.

During the 1970’s he lectured on the History of Art in various Art Colleges including Goldsmiths and Chelsea School of Art, where he was lecturer in Perspective.

In the 1980’s O’Connor worked as a consultant to the film directors Neil Jordan, Julian Temple and Stephen Frears and travelled extensively in Italy, Yugoslavia, Southern Africa, Spain and Portugal, painting lanscapes.

He has exhibited individually in London at the Marlborough Gallery, Clarges Gallery, the Christopher Drake Gallery, the Oxford Gallery, the Royal Geographical Society, the Leighton House Museum and Canning House. In Lisbon he has exhibited at the Grémio Literário, the British Council, Galeria Escada Quatro, Galeria Matriz and also in Sintra, Oporto, Régua and Quinta do Lago, Algarve.

He has also exhibited in London at the Royal Society of Portrait Painters, the Royal Institute of Painters in Watercolours and the Royal Academy, and in Lisbon at the Galeria Janelas Verdes and the Centro Cultural de Belém.

Various private houses in England and Portugal have his murals and portraits besides the Stratford Motor Museum, the Royal Observatory at Kew and the Clothworkers’ Hall in London.

His work is represented in various public and private collections, in Portugal and in England, including the Victoria and Albert Museum, Barclays Bank, Caixa Geral de Depósitos, Selecções do Reader’s Digest, Grupo Pestana, Lapa Palace Hotel, Museu da Cidade in Lisbon, Câmara Municipal de Sintra, as well as in the private collection of H.R.H. the Prince of Wales.

In 2004 he travelled to Rome and was granted permission to make drawings from life of Pope John Paul II, from which he painted a portrait authorised by the Vatican.

O’Connor has published four books of watercolours and drawings, accompanied by texts from Portuguese authors selected by Maria do Carmo Paço d’Arcos: Retrato do Douro – Portrait of the Douro in 2001, Perfil de Lisboa – Lisbon in Profile in 2004, Canção do Mondego – Mondego Song and Vistas de Cidades – Cityscapes, in 2009. In 1993 he also illustrated the book Uma Amizade – Cartas de Pascoaes a Anrique Paço d’Arcos of correspondence between the two Portuguese poets.

He is currently working on a series of oil paintings on the theme Death and the Maiden and preparing an exhibition of his most recent works. 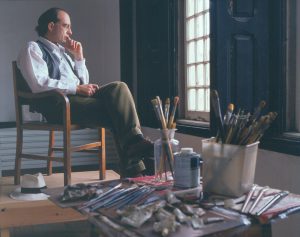 The artist in his studio 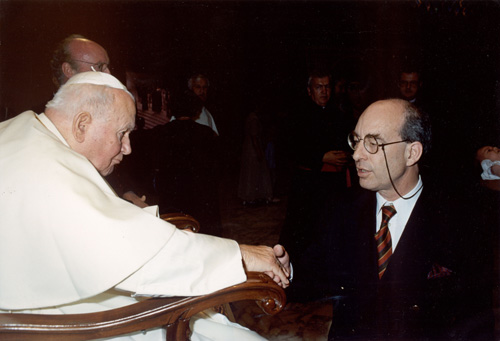 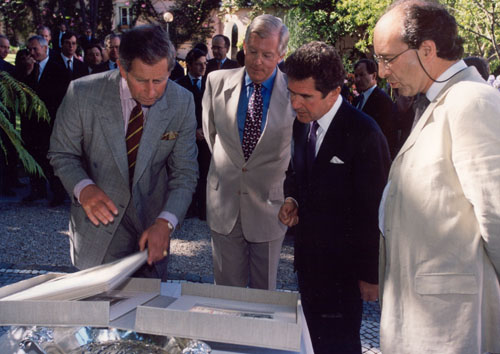 John O'Connor with H.R.H. the Prince of Wales